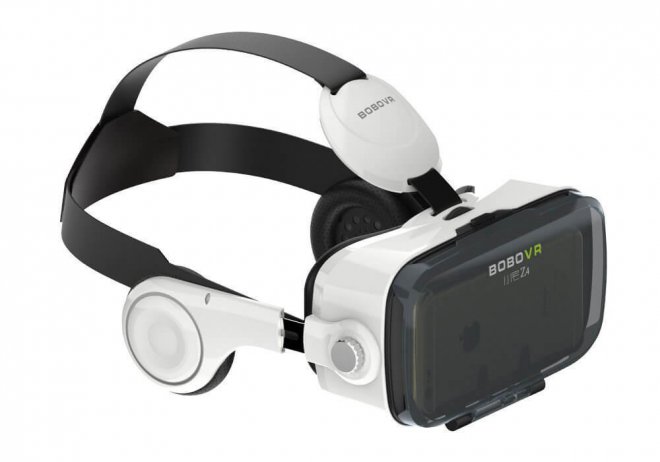 We have previously gone to Asia in the pursuit of inexpensive but still good VR headsets. The hunt has resulted in several great bets that we have tested and written about on this site. What they all have in common, however, is the fact that they have required a controller and headphones in order to be able to get that truly immersive VR experience. Bobo VR Z4 is a completely new and complete VR headset, where headphones and a controller are built in. That, along with amazing optics, great comfort, and a number of other advantages, makes Bobo VR one of the best mobile VR headsets made to date – bar none.

Bobo VR Z4 is a complete VR headset that gives you an amazing VR experience. As far as quality, it is easily on the level of Homido, and in many areas, it measures up to Samsung Gear VR as well. Where the Bobo VR Z4 excels and does it even better than the aforementioned two is with the built-in headphones and especially with the built-in controller.

The first time we took a virtual trip to China for a good and inexpensive VR headset, we found a great contender in form of VR Box 2.0. Later on, we tried Shinecon, and once again, we were positively surprised. On the latest trip, we found a VR headset that costs a little more, but which also delivers some of the best in mobile Virtual Reality headsets I’ve ever seen. The name is Bobo VR Z4. The number 4 means that it is the fourth version of the Bobo VR headset. At the same time, it also tells us that the manufacturer has a lot of experience with VR headsets – Experience that has been used to create a really great product.

Depending on the phone you use, Bobo VR has a field of view that goes all the way up to 120 degrees. That is equivalent to what you get with the most expensive high end VR headsets. In addition, there is built-in sound in the VR headset. It may seem unnecessary, since you have your headphones from the mobile phone anyway. In my experience, though, the less wires and the less cumbersome it is to use a VR headset (or any other product), the more you will use it.

The manufacturer of Bobo VR may have been thinking the same thing and was probably also inspired by the built-in headphones of Oculus Rift. And why not allow oneself to be inspired by the producer of one of the absolute best and most expensive VR headsets? – The result certainly speaks its own unmistakable language. In my opinion, Bobo VR Z4 is clearly one of the best mobile VR headsets available for purchase right now.

As with all the other VR glasses, you have a series of optional settings that enable you to customize th VR headset to your eyes. We are all unique, and the placement of our eyes is too. Therefore, you can also adjust the distance between the lenses, just as you can adjust how close they should be to your eyes. The last option means that you can avoid wearing your glasses inside the headset.

One of the things that make Bobo VR Z4 different is, as mentioned earlier, the built-in controller. You can turn up and down the sound on the VR headset, meaning you don’t first need to get out the phone to turn the sound up or down and then reinstall it. Many of the apps created for VR experiences are made specifically for Google Cardboard (they work off iPhone as well). However, they all require an OK button for you even to be able to use it. Bobo VR Z4 has one.

When we are at this level, it suddenly makes sense to compare the headset with the king of mobile VR headsets. Currently, I would have to say that is Samsung Gear VR. With Samsung’s VR headset, you get a customized control system that starts when you install the phone in the VR headset. It also means, however, that you are locked in and can’t just try the abundance of Google Cardboard apps that exist in both the App and Google Play stores. Furthermore, the most significant drawback to Samsung’s product is that you can only use it if you have one of the newer Samsung Galaxy S6/S7 or Note telephones. Bobo VR Z4 has none of these limitations and is compatible with all phones – both iPhones and Android.

In addition, Bobo VR Z4 also has built-in headphones, something which until now was a feature belonging only to the high-end product Oculus Rift. The last thing I want to compare is the field of view. Here, you get a field of view of up to 120 degrees with Bobo VR Z4. Again, this is equivalent to the best VR headsets in the high end. It is up to 20 % more than Samsung and 30 % more than a lot of the other, less expensive VR headsets.

The result is a considerably better and more immersive VR experience. I should note, however, that you only get the 120 degrees with larger phones, such as Samsung Galaxy S6+ or iPhone S6 plus. The larger the screen, the larger the field of view. If you have a regular sized phone, you will get a field of view of a still respectable 100 degrees.

The VR headset is fully compatible with both Android and iOS phones. The larger the phone, the better the field of view. As an example, with iPhone 6 you get a full 100 degrees, but with a 6S plus, you get all the way up to the 120 degrees.

Since Bobo VR Z4 is 100% compatible with all Google Cardboard apps, there are tons of options for entertainment. Below is one you should definitely try.

Within
This app was formerly called Verse, but has changed name to Within. With this app, you have the option of finding the best and most professionally produced VR 360 stories.
There is everything from animations to love stories to documentaries. Common to them all is the very high quality and entertainment value. Both the app itself and all the movies that can be downloaded and streamed are free.

It is important to emphasize that it needs to be original due the fact that there are copies out there of the Bobo VR Z4, which are of a considerably poorer quality. You can recognize the copies on the adjustment screws on the side and the round rings on the outside of the headphones are green instead of metallic colored.

I am a huge Bobo VR Z4 fan. Here is finally a great VR headset at a good price that is user friendly, and where everything you need is already built in. The end result is that the VR headset most likely will not end up in the back of your closet after the first VR fascination has subsided.

With their complete VR headset, Bobo have created a product that measures up to Samsung Gear VR and clearly beats Homido. And at a price that is considerably lower at that.

The price is higher than, for instance VR Box 2.0 and Shinecon VR, but these VR headsets have no headphones nor a built-in controller.

If you want the best VR experience at the best price, then it is my opinion that you should go for Bobo VR Z4.

We are using cookies in order to secure that you get the best possible experience on our website. If you continue using this site, you acknowledge the use of cookies.OkRead more